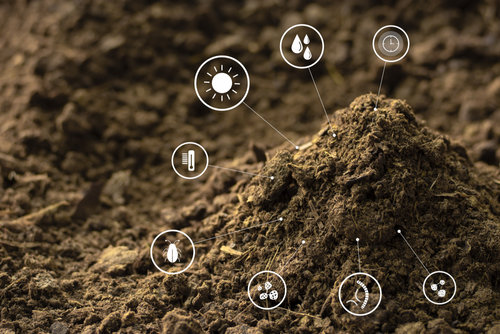 TEMPERATURE
All reactions take place faster at higher temperatures. However, an upper limit and an optimum working range for biochemical reactions have been described in the literature. Although a higher yield is generally obtained with temperature increase in waste cell treatment systems that do not contain live cells, a number of peak values should be considered in processes where microorganisms such as composting are effective and the maximum biological decomposition rate is targeted. There is a direct relationship between system temperature and constant control of the temperature and keeping it constant at certain intervals since increasing temperature after a certain point will result in a reduction in microbial activity and ultimately cell deaths. One of the biggest advantages of composting in Genema Ultra Efficient Composting Bioreactors is that these controls can be carried out from many points simultaneously and transferred to the automation system, automatically assigning the appropriate parameters to the most suitable values, thus creating ideal conditions and maximizing efficiency. It should not be forgotten that the heat generated in the system is not the cause of the compotation but rather the result.

OXYGEN & AERATION
During aerobic composting, large amounts of oxygen are consumed. If the supply of oxygen is insufficient, the composting process will switch to the anaerobic phase, which is an unwanted, very slow-running and odorous process. Air is an important heat transfer medium, but if excessive aeration is required, the compost material cools down and activity losses are observed. Aerobic microorganisms make use of dissolved oxygen in humid environments around them rather than using the air directly. Therefore, the oxygen gradient must be constructed correctly. In Genema Ultra Efficient Composting Bioreactors, it is ensured that the heat dissipation, moisture distribution and waste compaction processes, which are realized as a result of periodic shaft movement, are supported by automated air supply at suitable time intervals to ensure the protection of the activity of the process.

PARTICLE SIZE AND POROSITY
Although it is widely believed that the reduction of the particle size will accelerate the composting process, it should be known that the tendency of the particles of the very reduced material to increase to each other will increase and the free air gaps will be significantly reduced. This can be a major problem, especially in some composting systems where particles tend to compress. In Genema Ultra Efficient Composting Bioreactors, the material is regularly mixed and aerated with periodic shaft movement. Therefore, extra compressions and air gap losses are avoided. In this way, it is possible to work with thinner material and bioreactor volume is used more effectively.

MOISTURE
All organic materials contain carbon, hydrogen and oxygen. Since the composting process involves the biodegradation of the material, carbon dioxide and water are released into the system during the process. This water must be removed from the system otherwise high humidity; It will block the pores, prevent oxygen diffusion and reduce microbial activity. Conventional compost systems are based on the principle of moving a large amount of air through the compost mass to remove water as steam. This method is generally inefficient. Because it does not prevent the formation of leachate, excessive aeration leads to the phenomenon described in the literature as edge effects. Local cooling and drying reduce microbial efficiency. In Genema Ultra Efficient Composting Bioreactors, air drawn into the system in static periods keeps the vapor removal system under a slight negative air pressure, controls odor emissions and prevents excessive drying. During the rotation of the shaft, the exhaust fan accelerates and the volume of air drawn through the bioreactor increases considerably. This eliminates all moisture released. This approach offers great advantages:
-Optimizing the dehumidification when the air is released reduces the air volume required for the process and significantly reduces the power consumption of the air exhaust fan.
-While excess water is effectively removed, the nutrients and particles remain in the compost material and do not leave the process. The risk of excessive moisture and carbon dioxide lowering the pH and inhibiting the process is avoided.
-Moisture; it is moved by convection by means of low pressure additional air supply, not as a result of the high amount of air passing through the compost mixture. This prevents edge effects and excessive cooling.
-The moisture loss can be controlled by adjusting the fan speed.
-When the ambient air entering the bioreactor is desired, the effects of very cold climates can be minimized by heating.
-Moisture disappears as steam. No leaking water.
As with all compost systems, the wastes entering the Genema Ultra Efficient Composting Bioreactors must have a moisture content of 40-60% by mass. However, there is a great advantage of controlling the moisture loss mentioned above. In addition, it is not affected by environmental climatic conditions as it is a closed system.

C/N RATIO
The carbon/nitrogen ratio is actually a simple measure of the oxygen demand of the waste. Materials with low carbon/nitrogen ratio compost faster and therefore have higher oxygen demand. This may be important in systems which are not flexible for sufficient aeration. In these cases, high oxygen demand can lead to anoxic conditions and odor formation. In addition, wastes containing higher amounts of nitrogen will produce higher concentrations of ammonia and cause problems. Genema Ultra Efficient Composting Bioreactors are tolerant to low carbon: nitrogen ratios. Because the biofilter will be able to additionally compensate the oxygen demand of the waste.

MIXING
The importance of mixing in maintaining the oxygen level and eliminating edge effects has already been mentioned. Another important contribution of this process is the pathogen elimination and product safety by supporting equal composting of all materials. When designing this process in Genema Ultra Efficient Composting Bioreactors, the importance of not mixing the composted material on the back of the bioreactor and the uncomposted material on the front of the bioreactor was taken into consideration. It is ensured that biological populations that may be dispersed over the length of the byoreactor do not inhibit each other.

TIME
In batch systems, yield is directly related to reactor volume, while in continuous systems such as Genema Ultra Efficient Composting Bioreactors, the chemical properties and feed rate of the material fed to the system are associated. This means developing a completely different understanding from other composting systems. The retention time of the material in the bioreactor is defined based on the mass and density of the material fed on a daily basis, the rate of biodegradation, and the loss of mass and volume occurring throughout the process.